What strength nicotine e-liquid should I use? 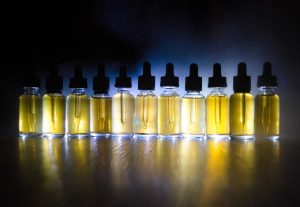 For cigarette smokers, the levels of nicotine are difficult to gauge, but in the world of vaping, it’s an important part of creating the correct e-liquid composition. If you’re a newcomer to vaping, you may find nicotine levels confusing. However, even if you’ve picked a flavour you’re fond of, you will still need to determine a suitable nicotine level for you.

In this blog, we explain how much nicotine features in e-liquid and whether any types of e-liquids are completely nicotine-free, as well as offer help with testing and reducing nicotine levels, and provide guidance on picking the right nicotine strength for you.

How much nicotine is in e-liquid?

It’s also important to note that UK and EU law only permit up to 20 milligrams of nicotine to be sold in any single product. The majority of countries outside of the UK and EU nations, however, permit up to 50 milligrams.

Do all e-liquids have nicotine?

Many different types of e-liquid contain varying traces of nicotine. However, it is also possible to use nicotine-free e-liquid that possesses none whatsoever. Although there are several reasons why someone may prefer to vape without the influence of nicotine, it’s a common decision made by former cigarette smokers that have phased nicotine out of their system and people who need to avoid nicotine for reasons relating to their health.

Shortfills are nicotine-free and allow the vaper to experience certain flavours in the e-liquid they vape. Then, if the user decides they want nicotine in their e-liquid, they can add a chosen amount by combining the shortfill with a nicotine shot. Alternatively, a vaper could use a 50/50 e-liquid - an even split of vegetable glycerin and propylene glycol that acts as the base liquid for flavouring and nicotine.

How to test nicotine levels in e-liquid

How to reduce nicotine in e-liquid

For anyone that has decided to switch to vaping as a way of stopping smoking, it’s important that they reduce the levels of nicotine in their system. Likewise, this may be a process that people do for health reasons or simply as a matter of preference.

Below, we offer tips on reducing nicotine levels in e-liquid:

When creating your composition of e-liquid, you have the option of changing the amount of nicotine and flavouring. At this point, you can make the decision to use less nicotine and replace it with more of the flavouring.

If you’ve been smoking cigarettes for a long period of time, coming off nicotine instantly can have a negative impact. Instead, consider gradually reducing the amount of nicotine in your e-liquid by a few milligrams every month until you’ve found an amount you’re happy with or no longer include it in your composition at all. If you then begin to feel like you’re ready to speed up the process, decrease the amount each week.

Cutting down on nicotine levels can be difficult if it significantly affects the flavour of the e-liquid. Mixing the e-liquid composition differently and increasing the amount of flavouring can help to mask a drop in nicotine levels. But if you can identify a change to the taste, it can ruin the experience of vaping. As a substitute for the reduced nicotine levels, try switching to a stronger, harsher flavour.

What strength e-liquid should I use?

Everyone is different and has their own preferences and tastes. As such, choosing the correct e-liquid nicotine strength is likely to differ from person to person.

A common reason for using e-cigarettes is as a method of cutting down or quitting smoking. However, in order for this to work, the amount of nicotine a cigarette smoker would usually smoke should be reflected in the level of nicotine they’re vaping with an e-cigarette.

If you aren’t using e-cigarettes as an alternative to e-cigarettes, you may wonder where to start with choosing nicotine strength. As it can be hard to gauge, users should consider starting with nicotine-free shortfills and gradually increasing the amount of nicotine from a nic shot they add until they find an amount they’re happy with. If, however, they’re happy with nicotine-free e-liquid, there’s no harm in sticking with it and simply changing the taste using different flavouring.