What is in e-liquid? 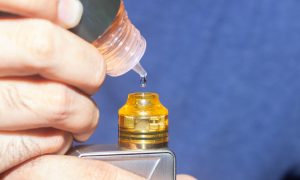 Available in an assortment of different flavours, e-liquid is used in e-cigarettes to produce vapour and includes multiple ingredients to enhance the taste and texture. But while experienced vapers are likely to be aware of what’s in their favoured e-liquids, those who are new to using an e-cigarette may be unaware of the contents.

In this blog, we look at what exactly e-liquid is made up of and explain what each of the ingredients do.

What is e-liquid made of?

E-liquid contains several common ingredients, each offering different properties. Below, we explain what these components are and why they’re often included in e-liquid:

Processed from fat, vegetable glycerine (VG) is a natural substance that is commonly used in e-liquid. Although it’s processed from oil, VG itself isn’t classed as an oil. Instead, it’s recognised as an alcohol and is non-toxic, making it safe to inhale.

Liquids with a high level of VG can become thick and clog up older atomisers. However, while many modern atomisers can deal with the presence of thick VG and work as normal, using e-liquid that contains aqueous glycerine (VG with water added to it) would be better suited to older e-cigarettes.

VG has no smell and is colourless but tastes sweet. Due to these qualities, it’s often used as a food sweetener in products such as cakes, cheeses, cough medicine, fizzy drinks, ice cream, meat and sweets, as well as being utilised to keep certain foods moist. Another benefit to using VG is that extensive research suggests that it doesn’t carry any health problems.

Like vegetable glycerine, propylene glycol (PG) is a common component in e-liquid. It also shares many of the properties of VG such as being colourless and odourless but possessing a sweet flavour. However, while it is used in the same way as VG to keep food moist, it isn’t sweet enough to be used as a sweetener in foods.

E-liquids will often contain both VG and PG, with the combination of the two forming the base of the formula. PG offers a number of uses, but in e-liquid, it acts as an emulsifier to keep all ingredients of the e-liquid mixed together. It also combines well with the VG to create a suitable product for inhaling, with the level of VG increasing or decreasing the thickness of the vapour and the flavour.

While VG is commonly used in food, there is a misconception that PG could be harmful to users due to it being an ingredient in toxic products such as antifreeze. However, PG is actually non-toxic, considered safe by regulators and a suitable component in e-liquid. In fact, it is present in many different edible products such as bread, cake mix, dairy products, fizzy drinks, food colouring, popcorn and soup so you may even be consuming it without knowing.

Although both VG and PG offer a distinct sweet taste, e-liquid doesn’t have any other taste without the use of flavouring. Not only that, but as there are a vast selection of different flavours to choose from, you can use flavouring to suit your own personal preference.

Flavouring in e-liquid is concentrated from a mix of natural and artificial food-grade additives that replicate the taste of certain foods and drinks. The flavouring itself makes up around 10 per cent of the total e-liquid content.

Under the regulations of the Tobacco Products Directive (TPD), all flavourings used in e-liquid should be safe. For this reason, it is naturally important that oil-based flavourings or hazardous substances such as diacetyl are avoided.

Is there nicotine in e-liquid?

A chemical compound that comes from the tobacco plant, nicotine is often associated with cigarettes and e-cigarettes. However, while many people include nicotine in their e-liquid as a less harmful alternative to smoking cigarettes, nicotine is an optional additional ingredient and users can also choose against including it.

Nicotine levels in e-liquid typically vary in strength between 0mg and 20mg. Numbers on the side of the e-liquid bottle will clearly display how many milligrams of nicotine are present in the e-liquid.

What chemicals are in e-liquid?

For anyone new to vaping, it can be a concern that e-liquid could contain potentially harmful chemicals. VG, PG and nicotine are all chemicals, but they are perfectly safe if taken in the recommended doses. Other ingredients, however, such as acrolein, diacetyl, diethylene glycol, benzene, cadmium and carcinogens could cause harm. As such, it’s important to be aware of what’s in the e-liquid you’re vaping before entering it into your system.