How to quit smoking using e-cigarettes 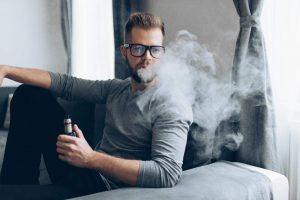 Over the past decade, e-cigarettes have become increasingly popular in the UK. Indeed, with as many as 2.7 million adult vapers in England alone as of 2021, according to a recent YouGov study, this habit is particularly prominent in former smokers. After all, vaping is thought to be far less harmful than smoking traditional cigarettes and cigars, while still providing that nicotine hit smokers have become accustomed too, making it a good way to help you quit smoking altogether.

However, are e-cigs safer than classic tobacco products, will taking up vaping actually help you quit, and, if so, how? In our handy guide to quitting smoking with the help of vapes, here at Just Juice, we’ll answer all of these questions and more.

Are e-cigarettes safer than smoking?

To put it simply, yes, using e-cigarettes is safer than smoking. As the NHS note, while it’s not true to say that electronic cigarettes are completely risk-free, they only carry a small fraction of the risk of cigarettes. This is because, unlike traditional tobacco products, e-liquids do not actually contain any tobacco and don’t produce harmful carbon monoxide when used. These are the two most dangerous aspects of cigarette smoke. Although it’s true that vape smoke does contain some of the same potentially harmful chemicals found in cigarettes, they are at much lower levels.

Based on the most recent research, leading health organisations including Public Health England and the Royal College of Physicians have actually estimated that vaping is as much as 95 per cent less harmful than smoking.

Will e-cigarettes help you to quit smoking?

According to the NHS, thousands of people in the UK are believed to have been helped to quit smoking using e-cigarettes. This is because these electronic devices can help former smokers manage their nicotine cravings while also removing the most harmful aspects of smoking in the process.

Interestingly, a recent major clinical trial led by Queen Mary University of London found that, when also combined with traditional methods such as face-to-face support, smokers that used e-cigarettes during the quitting process were as much as twice as likely to successfully quit than those who only used nicotine replacement products, such as gum or patches.

So, whether going cold turkey just doesn’t work for you, or you’re sick of falling off the wagon when you’ve used only nicotine patches or gum as a crutch, taking up vaping could be the perfect stepping stone you need to quit smoking for good. As we will look at in the next section, it’s important to ensure you are using the correct strength of nicotine e-liquid. This is especially important during the first few weeks of giving up cigarettes in favour of vaping, but once your cravings are satisfied without having to light up, you know you’re on the right path.

How e-cigarettes help you to quit smoking

Using an e-cigarette to help you quit smoking works in two ways. Firstly, if you use nicotine-infused e-liquids in your vape, your cravings will be satisfied and you will not go looking for a cigarette to get your hit. Secondly, unlike nicotine patches and gum, vaping provides a direct physical substitute for your cigarettes. This is to say, when you are relaxing at home, or at the pub with friends, for example - times you would usually be lighting up - if you have a vape, you have a physical device to keep your hands and mind occupied, potentially helping to reduce cigarette cravings. Many smokers light up when they are bored, stressed or simply see friends smoking. Having an e-cig close at hand gives you a safer method of dealing with your triggers.

The key to successfully using an e-cigarette to help you quit smoking is choosing a good quality device - such as the VooPoo Argus Range, for example - and finding e-liquids than not only taste great, but also contain a sufficient amount of nicotine to satisfy your cravings. Once you have found the right device and juice for you, simply remember to take them with you wherever you go. As time goes by, you can even start to slowly reduce the strength and amount of nicotine you add to the e-liquids you use, eventually even vaping only nicotine-free shortfills. Finally, it’s important to remember that you will not feel the full benefits of vaping unless you refrain from smoking cigarettes completely, so never be tempted to mix smoking and vaping when you are trying to quit the former.